The Hydraulic Test and Simulation of Field-Installed Systems

Design and build a turn-key system to test entire hydraulic systems without using any physical field-installed actuators, and do so in such a way that the system requires little-to-no field adjustments once installed. In addition, the system must confirm the proper operation of the hydraulic power unit (HPU) and associated valving assembly, automatically pre-tune the system’s valving, and generate the necessary documentation for “plug-and-play” installation.

The stand required a tremendous amount of testing flexibility to meet all of the customer’s requirements, including:

Genuen (formerly WTI) engineered, manufactured, and installed two fully integrated Hydraulic Simulation and Test Systems to meet our customer’s requirements. This included the complete operational testing of over 35 HPUs, setup and adjustment of all control valving, simulation of multiple combinations and types of field-installed hydraulic cylinders, simulation of each system’s operation in the field, and documentation package automation. The possible component-selection matrix resulted in over 64 system configurations to be supported. 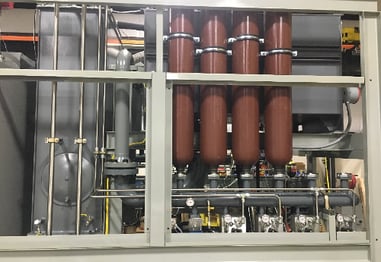 Genuen developed a custom solution to fully test HPUs and corresponding unit-mounted control valving, and to perform cylinder simulations in one test. To provide the operator with a physical sense of cylinder movement, the control screen portrays simulated cylinder graphics that extend and retract with varying loads.

The solution eliminated the need to connect cylinders, which could surpass 50 feet when extended, and mitigated the previous requirement to change out mechanical loads. Instead, the hydraulic system was designed to generate or accept inlet and outlet volumes, operational pressures, load pressures, cylinder stop points, cylinder feedback positions, and control valve interaction as if a cylinder existed.
Via automatic selection by model number or manual selection of an HPU, test profiles preload cylinder diameter and length, number of cylinders, number of extension and retraction stops and positions, load applied to the cylinder, cylinder speeds, etc.

The test operation was designed to function with as little operator setup as possible. An operator hooks up HPU hydraulic lines to the test stand, connects power to the HPU, interconnects the control wiring harness from the HPU to the test stand, scans in the bar-coded test specification, and presses the start button.

The cycle starts as the system fills the HPU to its proper level, starts the unit, and checks pump outlet flow, maximum system pressures, and operational pressures. It then makes recommendations so that the technician can dial in pressure(s) while monitoring and viewing the display for a system-recommended corrective action.

Once the HPU is set-up, the system energizes and de-energizes control valving to control the simulated cylinder, as it automatically makes valve adjustments (to be detailed in another document); records the valve’s flow(s), pressures(s), and adjustments; and calculates recommendations for operator interventions. It then identifies when the operator’s adjustments were correct and complete. When all settings are completed, the system runs one final cylinder sweep and records setpoints and historical data. Lastly, it compiles a job summary to be sent with the system to the job site.

In addition to a cylinder sweep test, the system is capable of running a cylinder leak-down test, where it detects leakage within the control valving, an overspeed detection test, and determination of valving operation on a falling load, for specific applications.

The system then automatically resets, drains the unit, and readies itself for the next system test.

Building the Muscle of the Test Rig

Genuen developed a structural frame assembly to house the fluid power and electrical components. This frame assembly also incorporated an electrically driven hoist system to assist with the interconnection of the large piping present on high flow HPUs.

The unit also includes an HPU fluid fill and evacuation (drain) system used to prep the HPU before and after testing. Since all of test fluid could not be removed from the HPU, the system also incorporated make-up fluid, as well as filtration and a cooling and heating control loop with self-contained chiller. 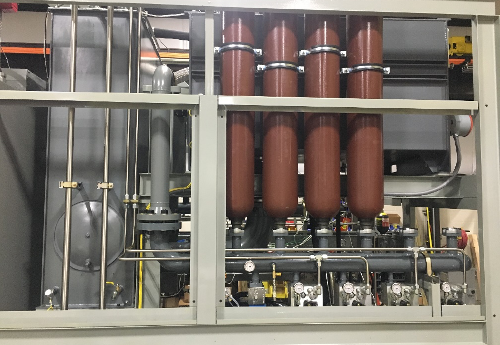 Building the Brains of the Test Rig

A PC desktop computer provides a user interface to the operator.

The machine also utilized a PLC to maintain system safety (e.g. interlocks, alarms, and status). Handshaking between the test application and the PLC ensures that loss of communications to the PC or RT test application will safely shut the system down.

Several position displays were also included to provide the operator a “physical sense” of the simulated load location during testing.

Genuen was able to engineer, build, and deliver a system, which many believed to be impossible. This enabled the customer to eliminate the need for either multiple physical test cylinders or the physical interpolation of sizes and varying loads. System test time(s), installation time, and field-adjustment concerns have been greatly reduced. System documentation provides installation instructions as well as a base-line, “as shipped” point of reference to return to should the system become out of adjustment in the future.