Developing a system to simulate a Class 8 truck in order to test additives that could potentially reduce operating friction in the transmission, ultimately reducing the costs associated with long-term operation, and increasing their overall life.

Lubrizol is a company that develops additives, ingredients and compounds that amplify the quality and performance of other products while reducing their environmental impact. For this application, Lubrizol sought to create a chemical to add to transmission fluid that would increase the durability of the components in the transmission of Class 8 trucks by reducing friction. By decreasing friction that occurs in the transmission, the new solution would increase fuel economy.

In order to complete this process, Lubrizol needed an efficient and accurate system to test and measure the friction losses in the transmission when different anti-friction additives were added to the transmission fluid to optimize the fluid performance.

Using Genuen's (formerly WTI) INERTIA™ and a "T" configuration dynamometer to provide a simulation system with model-based control that performs all necessary control to simulate the engine of the target vehicle, provides CAN bus shifting of the transmission through the TCM at 16 different speeds and takes measurements of the friction with different fluids, and creates an analysis based on the measurements.

Lubrizol wanted a cost-effective system where engineers could simulate the drivetrain of the target vehicle while using the actual transmission, select a combination of chemicals in the fluid, and then measure the amount of friction lost with a given speed and load. Their engineers were looking for a turnkey solution that would be flexible enough to easily reconfigure the drivetrain components based on the customer or vehicle requirements.  In addition, they needed automation software with CANbus functionality to automate the shifting of the manual transmission and model-based control to simulate the engine.

After trying a variety of in-house solutions, including using a diesel engine in the test facility, Lubrizol sought to find a turnkey vendor that would provide a simulation system for its transmission fluid testing.

Lubrizol selected Genuen to provide a solution because the company's concept aligned with Lubrizol's needs of affordable price, high performance, and quick and efficient delivery. Genuen presented Lubrizol with a "T" dynamometer configuration that accurately simulated the complete drivetrain, including the input motor, drive shaft, the actual axel and motors that simulated the road load of the tires. In order to meet the system performance criteria, gearboxes were employed that provided up to 17,000 ft.-lbs. of torque at each wheel.

By using Genuen's INERTIA - a powerful test automation software specifically designed for quickly and efficiently implementing real-time control, data acquisition and test profile generation - engineers took advantage of the CANbus functionality to automatically shift the transmission throughout all 16 possible transmission speeds. INERTIA also allowed for model-based control, which engineers used to simulate the engine used in the target vehicle that was to be attached to the transmission to accurately simulate the vehicle performance in its normal drive cycle.

Genuen's turnkey system allowed Lubrizol to handle the foundation requirements, as well as a fused disconnect for the required power. The new system includes:

In addition, custom engineered gearboxes were supplied to meet the required torque for the AC motors used to simulate the forces on the wheels. Genuen installed three 600 Hp AC motors to simulate both wheels as well as the input motor to maximize the test stand flexibility and allow Lubrizol to reconfigure the system to match future customer requirements. These dynamometers were configured on a DC common bus with a special front end to provide regeneration capabilities with less than 4% harmonics, enabling the excess energy to be either recycled on the test system to make up for power losses or recycled back to the grid to reduce the total cost of operation. In addition, by using AC motors for the "wheels," the system can simulate uphill and downhill operation mimicking the vehicles' actual performance drive cycle.

Because Lubrizol wanted to make sure their final chemical additives reduced as much friction as possible in all scenarios, they wanted to test drive scenarios with very high accuracy. To accommodate the high load limits of the target vehicle, Genuen supplied custom gearboxes for up to 18,000 lb. force as dictated by the vehicle under test. INERTIA provided model-based control for all three dynamometers, and Genuen engineers set up the initial test and configuration. In addition, Genuen developed all fixturing and the transmission mount assembly, and shipped and installed the entire system on-site. 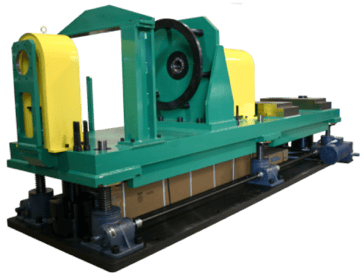 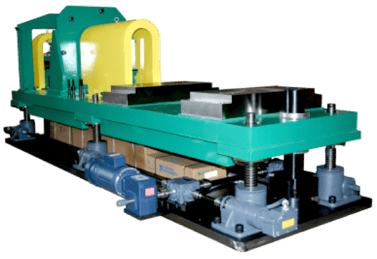 Figure 3. The dynamometer was developed as a "T" with the wheels on the left and right sides, and driveshaft engine at the bottom. The design allowed Lubrizol to adjust the centerline height of the unit under test.

The system was configured so that when the AC motor is in the absorption state, the DC common bus allows engineers to take that energy and put it back on the test stand, making up for the losses or electrical demand by the drive motor. Additionally, the harmonics on the electricity produced by the tester was measured to make sure it would not induce problems on other pieces of equipment that have energy supplied by the same power station. In order to alleviate that concern, Genuen utilized a special front end on the drives that reduced the harmonics to less than 4%, allowing any excess energy to be put back on the grid. Traditional solutions have load resistors and expel residual energy (heat) into the atmosphere, but this system stores and reuses the energy, reducing overall operating costs with its efficiency.

The new system performs all necessary control, simulates the transmission at 16 different speeds, takes measurements of the friction with different fluids, and creates an analysis based on the data from measurements taken. And, though the system was designed as a transmission dynamometer, its flexiblility allowed it to be used in a variety of configurations, such as: 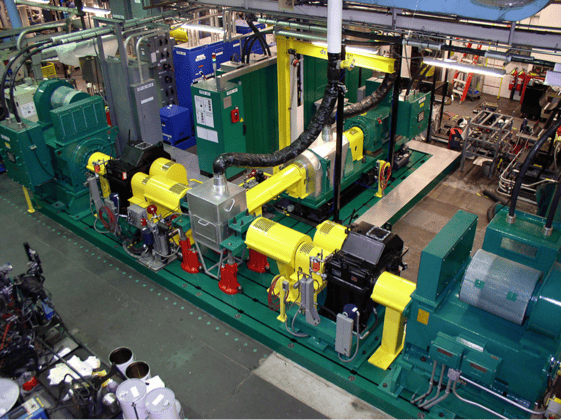