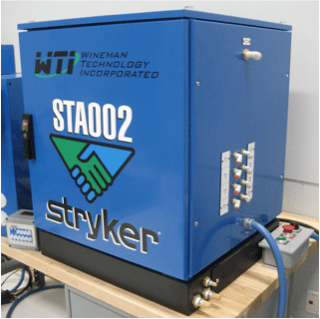 Create a flexible and scalable life-cycle and durability tester capable of handling a wide range of new medical products for design, development and verification testing.

Stryker is one of the world’s leading manufacturers of medical technology, offering a diverse array of reconstructive, medical, surgical, and neurotechnology and spine products. As part of their research and development efforts, they have a series of test systems used for life-cycle and durability testing during early product development. However, their existing platform was not architected to accommodate the company’s new goals and the hardware system design had limited channel count that limited the bandwidth of the test department. Stryker realized it was time to replace these test systems with a next-generation testing platform for both the development and verification phases of new products. Their goal, to increase testing efficiency, would be realized by maximizing software reconfiguration without the need for programming.  Stryker also wanted to enhance test automation and hardware expandability by enabling the system to be easily adapted to a wide range of products and test requirements.

Michael Trumm is a Senior Staff Engineer at Stryker Instruments who developed their original generic test platforms using scripts with NI LabVIEW system design software and data acquisition tools. As a result of National Instrument’s continued advancements in both hardware and software, flexibility of their tools, and acceptance in the market place as the benchmark products for data acquisition and test systems, Stryker made a long term strategic decision to standardize on the NI platform. However, due to a need for additional engineering resources and the increased complexity of the proposed design, Stryker decided to consider a third-party systems integrator to assist in the development of a next-generation generic test platform. Stryker chose Genuen (formerly WTI) because of their extensive experience creating state-of-the-art test systems as well as their in-depth familiarity with NI products.

Designing a high-channel-count, universal test stand platform with a versatile software communications framework which allows additional hardware components to be easily added and controlled by a main operator interface.

“Having standardized on the NI hardware platform and LabVIEW, we needed to identify an engineering firm with the technical capability to help us develop our next-generation generic testing platform. We wanted to work with a company that had extensive LabVIEW test system development expertise and a long list of proven applications. WTI was able to take our test concepts to the next level in terms of both capability and capacity to make our existing test investments even more valuable.”

Building a Universal Tester Platform for Life-Cycle and Durability Testing

The previous system was designed to run using detailed step sequences called scripts written using customized forms in Microsoft Excel, but could only run five scripts at a time. Genuen used object-oriented programming (OOP) in LabVIEW capable of executing an unlimited number of scripts, provided the hardware can handle it. During a preliminary benchmarking test, the TRUST box could easily handle 100 simple scripts running in parallel. This parallelism has provided Stryker the option to effectively run two units under test (UUTs) from a single TRUST box, each independently, providing a 100 percent throughput increase. An important design paradigm for the TRUST platform is to ensure that software is not the limiting factor in performance. This way, the hardware can always be upgraded with more RAM and processing power if more scripts are needed. 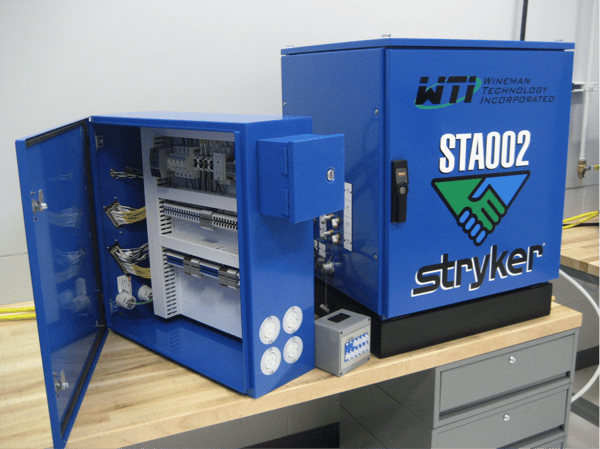 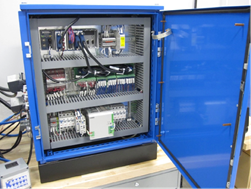 While Genuen was working on the preliminary design of the TRUST platform, Michael Trumm approached the company about a software architecture idea he had. The majority of Stryker Instrument’s test systems communicated with its hardware components using standard driver architectures, which was not a scalable design. Michael’s new concept involved using a main software program to read scripts and dynamically send commands to secondary software applications that controlled the system’s hardware functions via a standardized Ethernet protocol. By separating the user interface from the specific hardware control and data acquisition functions, additional hardware components could easily be integrated into the system later. This decoupling approach would provide a more distributed, modular, and flexible software framework that resulted in less required time and effort to develop specific test solutions and would promote reuse of existing LabVIEW code. It was estimated that generating a standardized user-interface and allowing hardware control software to be developed around a common communications architecture could reduce the software development time for future test systems by more than 50 percent. Genuen agreed, and the Test Regulation Over Networks framework was born. 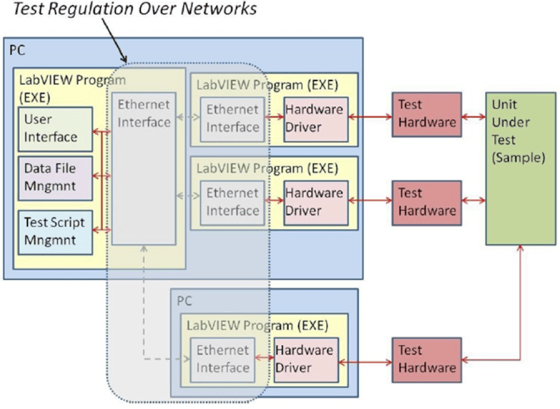 Figure 3b. The new software architecture decouples specific hardware control and data acquisition functions from the user interface in the test system.

Built on LabVIEW, the Test Regulation Over Networks framework consists of three parts:

Figure 4. The Test Regulation Over Networks software framework consists of three main components that work together to create a highly flexible, distributed, and modular system.

The user-interface and individual test equipment communicate over Ethernet; thus, to add any new hardware component, an IO Portal application is created to enable the equipment to talk over Ethernet even if it is not natively supported. For example, the MCP can request to read a certain channel or power cycle of the unit under test over Ethernet, and the IO Portal will translate and execute that instruction to the NI CompactDAQ or appropriate device. Using this design model, the Test Regulation Over Networks framework was successfully implemented and deployed in the first TRUST box.

The Benefits of the TRUST Test System

With a high channel count and the ability to easily modify a test sequence using scripting, the TRUST platform is ideal for medical device design and development testing because it can adapt to the iterative changes associated with the typical product design process. TRUST is running more scripts and monitoring more channels than the previous system which provides more test feedback to the design engineers. TRUST also can accomplish similar testing approximately 20 percent faster due to an enhanced script engine at a much higher data acquisition rate.  Additionally, end-users of the system appreciate the ability to define custom channel names versus generic channel numbers used by the previous system.

The Test Regulation Over Networks framework also provides a more elegant and stable software solution that is scalable for incorporating new hardware components in the future. This methodology has allowed Stryker to reduce current test system expenditures by 50 percent while increasing effectiveness of the system with added functionality. Furthermore, the technicians and engineers that create the tests utilize the same environment for script creation, eliminating the need for additional training.

In 2012, Genuen worked very closely with Michael Trumm during the requirements definition, development and deployment phases of the project and completed the first TRUST system within four months. Genuen also completed the development and delivery of four additional TRUST systems 3 months later.  Stryker plans to purchase additional TRUST systems in 2013 and is currently working with Genuen to create software for a new life-cycle tester for surgical instruments using the Test Regulation Over Networks framework. This new test system will use a robotic arm to grab a surgical instrument and drive it into a cut medium to simulate surgical procedures. New IO Portal programs will be created for hardware components such as a programmable power supply, robot controller and force-torque sensor while re-using the NI compactDAQ IO Portal already developed for TRUST. Stryker continues to choose Genuen for its quality of service, innovative design capabilities, and rapid time to deployment that enables them to deliver superior test systems for medical devices.