To provide two Winch Control Systems to test the performance and durability of various sizes of winch assemblies in both automatic and manual modes. The systems needed to be manufactured for the testing of a wide range of products, designed for an external environment, and configured for future relocation to an interior environment.

Genuen (formerly WTI) partnered with a leading manufacturer, who specializes in a wide range of winches and winch control products, for a solution to their testing requirements. As a supplier to the fishing/marine, crane, utility, oilfield, offshore, and many other industries, they required a flexible testing method to meet the constantly evolving performance and durability test requirements for an increasing number of products. 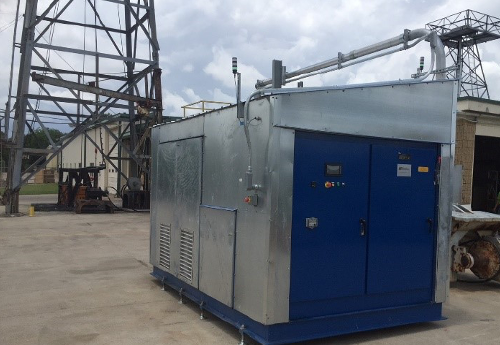 The hydraulic control skids were configured with a removable exterior stainless steel ”skin” and support frame assembly. This would protect the control devices from the weather for the first year of use. Later, when the skids were to be relocated to an interior location, the skin and supporting frame assembly could be removed allowing easier maintenance access. In addition, the skids were to be supplied with an air/oil heat exchanger system, which could be replaced with a water/oil system once moved inside.

Figure 2. The hydraulic system assembly with the “skin” removed and configured for internal testing

Each skid featured an onboard PLC for autonomous test rig control as well as a DAQ system with local, remote, manual, and automated modes.

An “All in One” PLC/HMI provided the customer with an open access program (freeware software approach), and a light pole was added for visibility from the control room in the adjacent building. The PLC was configured to provide pump control, monitor all system functions, closed loop control of the system temperature, and fault monitoring/indication.

The system was also configured with easy-to-use UUT interfaces like hydraulic quick connection fittings and electrical MIL-type connectors. This allowed the operator the connection flexibility required for a wide range of UUTs and their option packages.

Figure 3. The system’s hydraulic and control signal connections allow for a wide range of UUT types and test configurations.

The system consisted of: 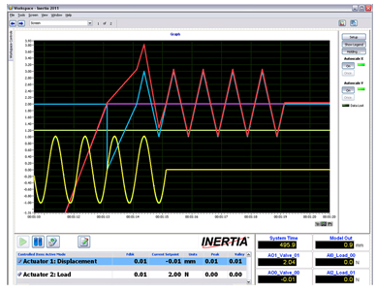 In addition, each operator station included joystick interfaces, which allowed for the manual raise/lower positioning of the load, operation of the auxiliary controls, and a potentiometer to dial-in the overall winch test speed.

The flexibility of these systems provided our customer with the capability of testing past products, service returns, and the ever-changing market of upcoming designs. Their past testing had been completely accomplished through the operator’s manipulation of the joystick, while remotely viewing the test from the control-lab window. This used to require a technician to be present and to manually operate all tests over an eight-hour day. Today, the addition of test automation has freed up technicians for other duties and allows 24/7 testing without operator intervention.

In the end, Genuen delivered flexible test systems that provide our customer with valuable product data, which enables them to make intelligent decisions earlier in the development cycle to deliver a more robust product to their customers.