The UI Thread, Root Loop, and LabVIEW: What You Need to Know

You may have never heard of the UI thread or the root loop, but as a revision to the old adage goes, what you don’t know can hurt you.

So, what is the UI thread?

The majority of nodes in LabVIEW will have no problem executing in the 20+ execution threads mentioned above, but certain nodes in LabVIEW can only execute within the UI thread. There is a void of documentation regarding this subject, and therefore there is no real comprehensive list of functions and VIs. The trick to understanding the UI thread is knowing the basic processes that will require the thread, which are listed below: 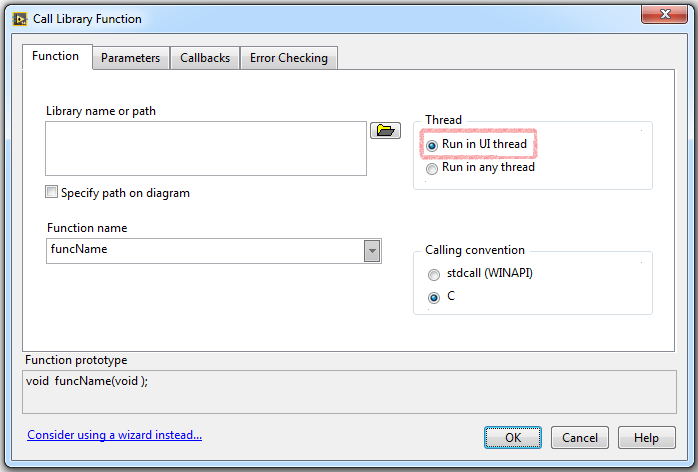 The Call Library Function node allows you to select UI thread or any execution thread.

The UI thread uses cooperative multitasking to allow simultaneous execution of nodes, and it exists on all implementations of LabVIEW: Windows, Linux, Mac, etc.

Well, that doesn’t seem so bad… what gives? 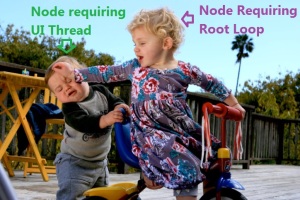 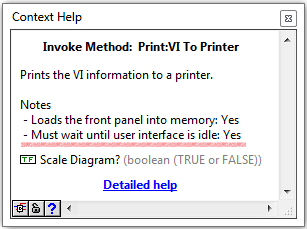 Example of a VI server call that requires the Root loop as indicated by: “Must wait until user interface is idle: Yes”

How can I determine that the UI thread or root loop is to blame?

UI thread and root loop issues can be hard to track down in large applications. If a time-critical process is running poorly, and performing UI actions (clicking, dragging windows, long-click on the title bar, opening a context menu or dialog) seem to exacerbate the situation, then there is a good chance that a portion of the time-critical process is running in the UI thread and is also victim to nodes requiring root loop.

So how should I take this into consideration when writing my application?

In addition to the above information, there are special cases regarding the UI thread and root loop that might not be as obvious. The following list is a good starting point for what you can implement to avoid running into issues with your application.

While this isn’t a fully comprehensive list of all the nodes and instances that will put a VI into the UI thread or invoke the root loop, hopefully it serves as a solid base of knowledge on the topic. The root loop is elusive, and often hard to debug or pin as the culprit for an issue within an application. It isn’t a bug in LabVIEW, but a consequence of OS-level messaging that can’t be avoided. With this knowledge you should feel confident in finding a solution when the UI thread and root loop don’t want to play nice.