What is Advanced Air Mobility? And, How is it Regulated?

For decades, the dominant form of commercial air transportation to travel from city-to-city, region-to-region, or country-to-country has been the jetliner. Initially, this form of transportation was reserved for the wealthy, but as airplane designs and operations have become more efficient, the cost of flying has become much more attainable for the average citizen. However, for more localized travel, flying via airplane is impractical—the cost isn’t competitive with other modes of transportation and the process of checking in and going through airport security often minimizes any significant time-saving advantage gained by flying. Helicopters offer an alternative for local transportation, but, at a cost of $30–50 per mile, are also impractical. 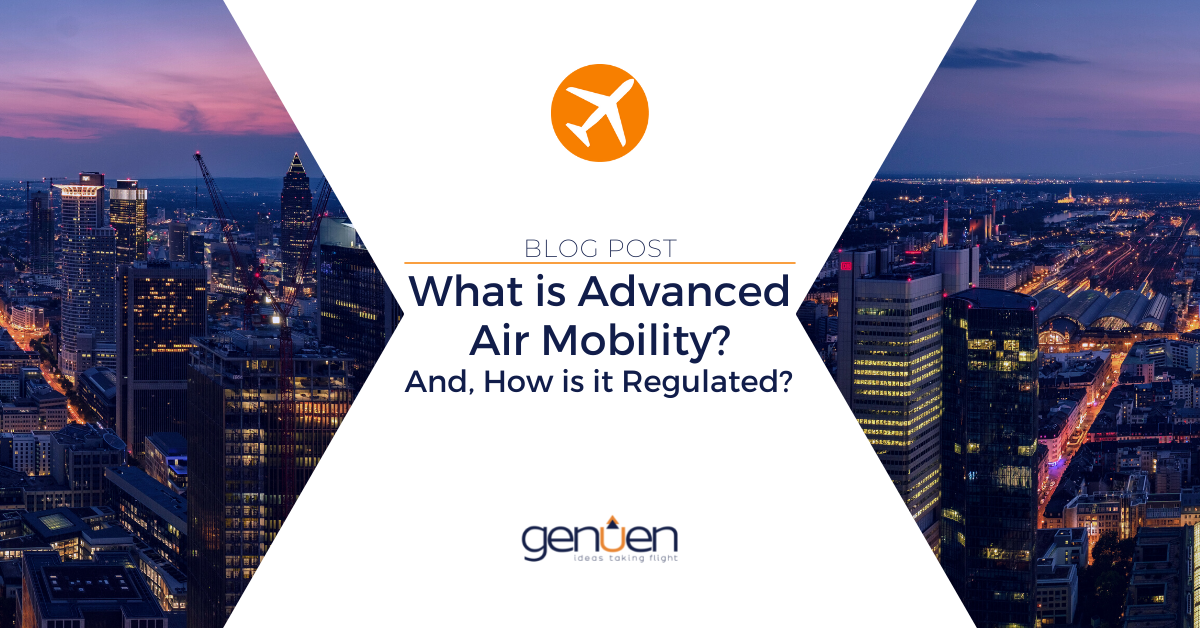 In recent years, the concept of Advanced Air Mobility (AAM), has gained popularity as a way to address the affordability of regional and local air travel. AAM, which includes commercial intra- and inter-city travel, cargo delivery (including drones), and public services. Urban Air Mobility (UAM) is a subsector of AAM and, unlike regional air travel as we know it today between nearby major cities, UAM is a much more localized form of transportation within a specific metropolitan area. UAM is expected to operate within a 20–50-mile radius and to serve as a sort of “air taxi” for passengers.

In this blog post, we’ll be exploring topics that are critical to accelerating the regulatory environment for UAM.

Compliance to Regulations for UAM

The development of the UAM industry and electric vertical take-off and landing (eVTOL) aircraft has been driven by non-traditional aircraft manufacturers. While these companies bring fresh ideas and innovation to an industry that has largely remained the same for the last century, they have a disadvantage when it comes to navigating the regulatory environment when compared to traditional aircraft manufacturers. For these eVTOL aircraft manufacturers, the primary testing focus until now has been proof-of-concept by testing of sub-scale models. Now, many of these manufacturers are beginning to develop full-scale models for type certification and need an understanding of the regulatory framework in which they will need to prove compliance.

One challenge that eVTOL aircraft manufacturers face is that the regulatory process for type certification is more suited to slowly and safely introducing technological change into the national aerospace system than it is to introducing revolutionary form of transportation. While eVTOL aircraft are revolutionary, they have extensive similarities to traditional commercial aerospace aircraft that both regulatory authorities and manufacturers can draw from. Like jetliners, eVTOL aircraft will primarily be used for commercial transport; specifically, passengers. Unlike jetliners, eVTOL aircraft will be more comparable in size and use to chartered helicopters and fixed-wing aircraft while using novel propulsion and control technologies.

While means of compliance have not yet been officially defined, there is a defined regulatory framework: 14 CFR Part 23. Originally written in 1965 and revised several times to reflect changing technology, the standard pertains to small commuter aircraft (19 passengers or fewer) and other aircraft designed for 9 passengers or fewer, also factoring in the gross weight of the aircraft. In 2017, 14 CFR Part 23 was revised to regulate designs based on performance- and risk-based standards.

Compliance to these standards often involves flight testing, testing of aircraft systems, and testing of subsystems. Fortunately, many of the components and systems being tested serve similar functions to those used in other aircraft.

GAMA and Its Role in UAM and eVTOL Regulation

Within GAMA is the Electrical Propulsion Innovation Council (EPIC) committee. EPIC primarily advocates for electrically powered air travel, with a heavy focus on eVTOL, electric propulsion for regional aircraft, and hybrid technology. The committee also includes sub-committees that focus on specific topics such as Infrastructure and Simplified Vehicle Operation.

In May 2021, Genuen was accepted as an associate member of GAMA and began participating on the EPIC committee and sub-committees. Initially, we plan to do a lot of active listening to ensure that we understand the challenges and concerns of UAM aircraft manufacturers. With over three decades of experience in end-to-end test solutions and test strategy across industries, Genuen can provide valuable perspective on the processes required for standards compliance. As participants, we hope to get involved in committee work researching and providing insights for standards recommendation and development.

How Will UAM Standards be Created?

As UAM technology is advancing and concepts are becoming reality, the need for regulatory standards is becoming more urgent. In the U.S., the Federal Aviation Administration (FAA) will be the regulatory authority for UAM, but is unlikely to specify the means of compliance to the regulatory standards. Instead, the government will look to panels of experts or outside organizations to develop standards. While there are many different standards bodies looking to contribute, GAMA will likely play a large role in advocating for the development of standards and their use as a way to means of compliance. GAMA recognizes the challenges of the industry and has the knowledge of the regulatory process to advocate for the use of standards.

Industry standards for UAM aircraft have not been finalized, but in order to keep first-to-market advantage, UAM and eVTOL aircraft manufacturers need to prepare for regulatory compliance now. UAM is an exciting new development with innovative technology, but it still falls within the purview of aerospace. When it comes to standards development, we are not starting with a blank slate.

Genuen can help you anticipate and understand the regulatory landscape of UAM. With our extensive knowledge of the processes and documentation required for compliance to aerospace regulatory standards, we can perform a gap analysis of your existing development processes, help establish compliant processes and develop test data collection systems and solutions to prove compliance.

Are you ready to get a head start on compliance to regulatory standards for UAM? Contact Genuen today to start a discussion.