Hyperloop is a developing form of mass transit for both passengers and cargo proposed by inventor Elon Musk in a 2013 white paper called "Hyperloop Alpha." The concept of Hyperloop was presented as a public domain idea that anyone could choose to attempt to turn into a reality, driving innovation.

The idea is to create a superfast mode of transportation that allows groups of passengers to travel traditionally longer distances in a short (even commutable) time. For example, a commute from Dallas, TX to Austin, TX via car currently takes about 3 to 3-1/2 hours. The same commute via Hyperloop would take approximately 20 minutes. In Hyperloop, cars called pods that can support around 30 passengers travel along track routes inside vacuum tubes. The pods, which experience a negligible amount of air resistance, move at projected speeds of 700 mph using electromagnetic propulsion, similar to that used on maglev trains. 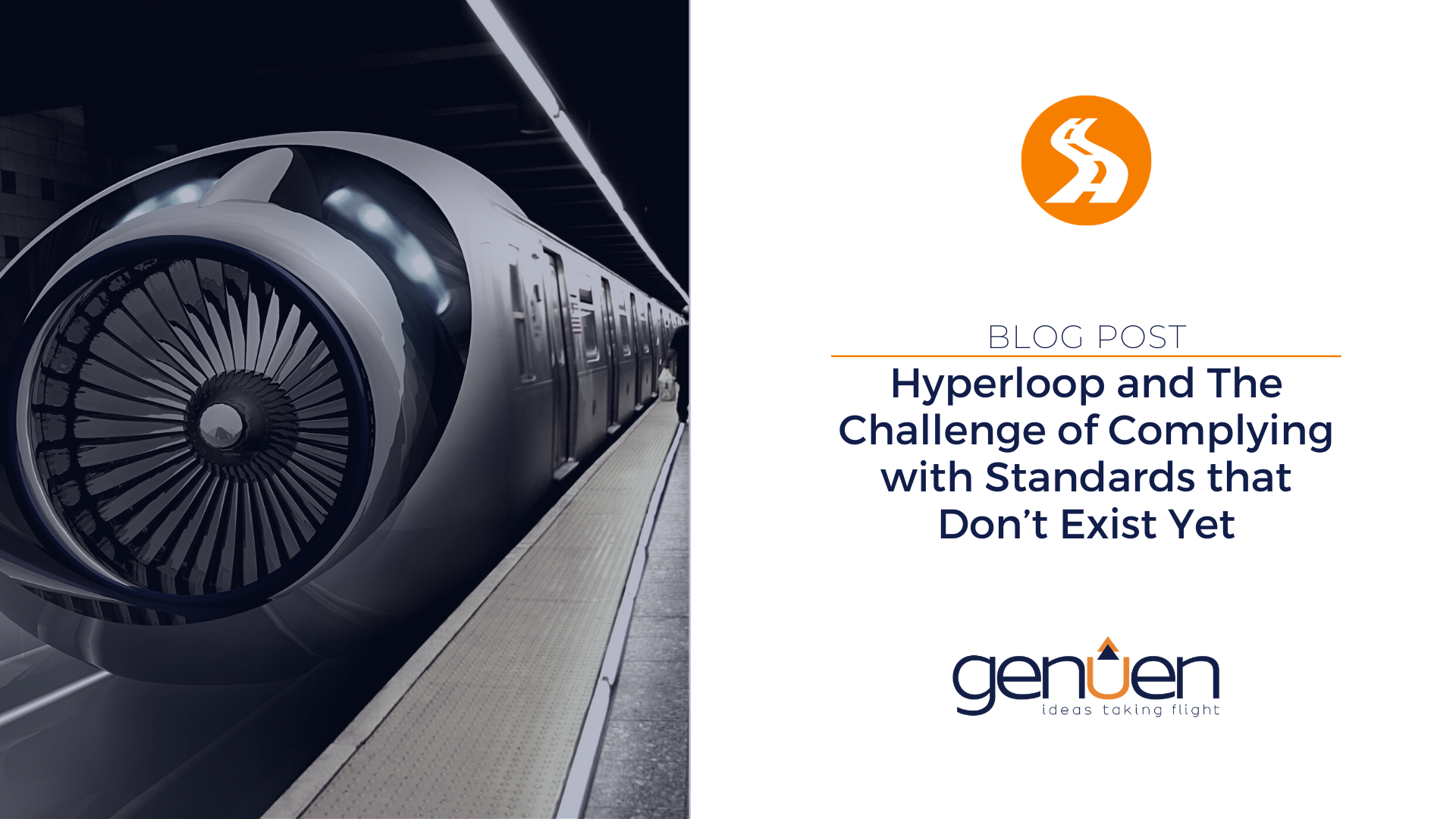 Thanks to the open source concept, there are several different companies looking to realize Musk’s idea. However, one factor that makes Hyperloop unique when compared to all other modern forms of mass mobility developed decades or even centuries ago is that while there is guidance from organizations like the Non-Traditional and Emerging Transportation Technology (NETT) Council, no regulatory authority exists yet to establish standards for safety and for functionality. Knowing that these standards will exist eventually, many of these innovators are seeking to collaborate with partners like Genuen, who can help them anticipate to what they will need to comply and how to prove it.

How Do You Comply with Standards that Don’t Exist Yet?

But how do you comply with standards that don’t exist yet? At Genuen, we’ve been drawing from the similarities to existing forms of mass mobility. The great speeds at which Hyperloop pods travel are reminiscent of commercial air travel. Like airplanes, Hyperloop pods experience virtually no air resistance. The propulsion technology used in Hyperloop is similar to that of maglev trains. Also similarly to traditional rail, Hyperloop pods travel on tracks. And the number of passengers a Hyperloop pod can support is comparable to the number of passengers on a city bus. We can look at these similar technologies and the standards used to regulate them as a blueprint for future functional safety standards for Hyperloop.

In our three decades of experience defining and analyzing test development processes for aerospace, rail, automotive, off-highway, and even medical device standards, we’ve noticed that on a macro level the process of showing compliance to standards is similar no matter the industry. All of these standards take a risk-based approach, requiring more rigorous testing and documentation for components and systems that carry a greater risk to the functionality and safety of the entire vehicle.

Why Should You Worry About Standards Compliance Now?

As Hyperloop technology and innovations continue to gain traction and get ever closer to becoming a reality, one thing is certain: regulatory authorities and standards will come eventually. It’s best to anticipate these regulations and proactively prepare for them. The consequence of not actively and thoroughly following design processes required for regulatory compliance from the beginning is that you may have to go back and perform qualification testing in order to capture artifacts necessary for regulatory approval. This will result in additional time and cost, and could hurt any first-to-market advantage that you may have.

Hyperloop is a revolutionary idea that is gaining speed. Some companies are predicting that passengers will be using Hyperloop to travel before the end of this decade. With such a fast development timeline, standards and regulation will be here soon. Genuen is well equipped to help you anticipate the processes you will need to follow in order to show compliance with high-level functional and safety requirements. As Hyperloop progresses, we’ll be able to help you prepare to perform test implementation to micro-level requirements as well.

Getting Genuen involved early and often can help you save time and money later. Start a discussion with us today to see how Genuen can help you get your innovative technology to market.